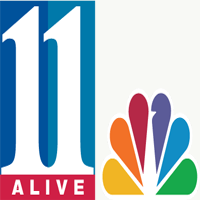 11 Alive News is an entertainment channel based in Atlanta, Georgia, United States.  It was established on 30 September 1951 and owned by Tegna, Inc. The channel call letters represent the XI (11 in Roman). 11 Alive affiliated with NBC and broadcast on Digital channel 10 (VHF) and Virtual channel 11 (PSIP). WXIA-TV branding is used for the 11 Alive and it is popularly known with Atlanta metropolitan area by its on-air branding 11 Alive since 1976.

11 Alive News was signed as WLTV on 30 September 1951 as ABC affiliate channel 8 and owned by a group of Atlanta businessmen. Cincinnati-based Crosley Broadcasting Corporation purchased the channel in 1953 and changed its call letters to WLWA. Crosley shifts the channel over-the-air frequency to channel 11 because of signal interference with WROM-TV (channel 9) in nearby Rome. WLWA was purchased by Indianapolis businessman Richard Fairbanks in 1962 as a joint agreement between Crosley and Fairbanks and changed its call signs as WAII-TV which stands for Atlanta’s 11(ii). In 1968 the channel was sold to Pacific & Southern Broadcasting and known as WQXI-TV. This company merged with Combined Communications and changed call letter’s WXIA-TV on December 25, 1973. The channel acquired 11 Alive branding in September 1976. The channel got NBC affiliation on 1 September 1980. On June 29, 2015, the Gannett Company split into two parts on 29 June 2015 and WXIA retained with Tegan .

It broadcast 28 hours 25 minutes newscast in a week and many syndicated shows. Some notable programs of the channel are given in the table.